I enjoyed watching the Showtime series “George & Tammy,” which was based on the book by their only daughter Georgette Jones. We interviewed Georgette for our Opry Docs films on Circle All Access. The George Jones documentary debuted in 2020 but the network held the Tammy Wynette film. I’m hearing Tammy may finally air in 2023 with a re-air of the Jones film. Makes sense. Let’s hope!

In December, we began releasing a 3-part video series on YouTube documenting the conversion stories of individuals who are now Orthodox Christians. “My Journey to Orthodoxy” is a short subject series featuring fascinating interviews regarding the contemporary appeal of a very ancient faith. Video link: https://www.youtube.com/watch?v=GqWKhSQedvE&t=9s

Businesses need video to stand out on their web sites and social media. We had a great experience producing a package of spots last fall for SailNashville utilizing a drone and GoPros. Shorter versions of the videos became underwriting spots on Sunday nights on our local PBS affiliate WNPT this summer. The videos were produced to expand the company’s market reach for sailing classes.

We produced a short-subject fundraising appeal with actor and musician Jonathan Jackson in support of an Orthodox women’s monastery in New York. The monastery will include a church, the first in the United States to be named for St. Joseph the Hesychast, which Jonathan played in a recent movie. Clips form the film were included in our project. Jonathan is a kind and very spiritual person. Many know him from soap opera work and the ABC series “Nashville,” but he is a much deeper guy. We enjoyed shooting with him (and appreciate the loan of some of his original music).

I was deeply saddened by the passing of Charlie Daniels. He was the real deal. I worked with Charlie on a number of projects, including the Opry and the Journey Home Home Project, a non-profit he founded with manager David Corlew to help veterans transition back to civilian life. Charlie was genuinely patriotic. He was also a genuine, devout Christian. He was a friend and I will miss him.

TWAPictures announces the broadcasts of three documentaries (30 minutes) featuring country legend George Jones and bluegrass pioneers Bill Monroe and Flatt & Scruggs. Two additional films about Tammy Wynette and Johnny Cash are pending scheduling, Check listings in 2022 on Circle All Access digital platform for airdates and times. This is some great stuff! I got to work with Jones and Earl Scruggs in some of my earlier projects, so it was a honor to produce and write these programs.

Clips from Tammy Wynette and Johnny Cash can be shared privately on request. Thank you. 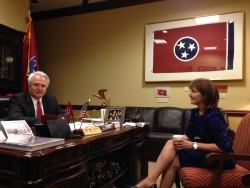 We produced five seasons of a public affair series for statewide public television in Tennessee. I love news and public affairs dating back to some of my earlier work for PBS, such as the documentary “Great Smoky Mountains: Code Blue” and the interview special with (then U.S. Senator) Al Gore, “Earth in the Balance.” “Tennessee Capitol Report” was produced to provide greater transparency for the General Assembly.

TWAPictures had the honor of producing three live gubernatorial inaugurations for statewide public television in 2011, 2015, and 2019. The first two were for Gov. Bill Haslam. We first met Gov. Haslam as a candidate in a personal interview special with his wife Crissy for Tennessee’s six PBS stations. In 2019, Tennessee inaugurated Gov. Bill Lee, who is now starting his second term as Governor.

Yes, authors need video too to promote their work. Video provides a personal medium for a writer to introduce themselves and their new book. We have done a number of book trailers for Orthodox Christian author and artist Ariane Trifunovic Montemuro. Let us produce your next book trailer. Video link: https://www.youtube.com/watch?v=Vz9ktt-LawU&t=137s to watch our first trailer for Ariane.

Former Chancellor Robert Khayat was the 2016 recipient of the Ole Miss Women’s Council Legacy Award. The University of Mississippi experienced tremendous growth and change during his administration. Producing a film documenting his legacy brought us all full circle. I was a student of his back in 1982-83. The film debuted at the Legacy Award dinner at the Manning Center on April 16th.